Kindly do any one of the given Case Analysis individually and submit the report to undersigned by email &/or hard copy by Monday, January 4, 2020.

Quaker Oats Stands for a Healthy Heart
Pepsico had acquired Quaker Oats globally in 2001. In India, it was launched nationally in 2006 and had since seen considerable success, becoming the market leader in just 2 years, thanks to a well-planned advertising and communications campaign. As a product, oats has various health benefits – reducing cholesterol, managing weight and providing essential nutrients such as B-glucan, complex carbohydrates, proteins, fibre, etc. However, it is an alien taste in the Indian market because Indians areused to the traditional morning breakfast of parathas, idlis and upma. Hence, the challenge for Pepsico and its advertising agency BBDO was to make Quaker Oats palatable and acceptable to Indian households.

Through research, the agency had learnt that about 46.9 million Indians are likely to suffer from heart diseases by 2010. India was considered the cardiovascular disease capital of the world and statistics showed that the number of heart patients would double between 2005 and 2015. In the wake of this, Pepsico and BBDO embarked on a campaign around the creative concept “Make India heart healthy.” The primary objective of the campaign was to create awareness and educate consumers about heart health, while also informing them about the goodness of Quaker Oats. The company hoped that this would eventually influence trials and make consumers buy the new product. The campaign targeted middle-class husbands and wives, who were 30 years and above with hectic lifestyles. The integrated health drive campaign relied on various media such as print, television, radio, digital and outdoor events, so as to engage with the target audience at all possible touch points.

Print ads were informational in nature, apprising people of the appalling heart health of Indians. The ad emphasized on the benefits of oats for boosting “heart health” and directing people to go online and visit PepsiCo’s Website goodmorningheart.com for more information (Figure 1.4).

A television ad depicted a young girl inspiring her father to take up the Quaker Oats 30-day challenge to improve the health of his heart so that he could beat a fellow student’s father in a contest. Another ad showed ahousewife advising other wives to purchase Quaker Oats to improve their husbands’ heart health. Both ads ended by summarizing the benefits of Quaker Oats. Yet another television commercial announced the grave statistics of the heart condition of most Indians to an audience of corporate executives. It urged them to join Quaker in its mission to make India heart healthy by visiting goodmorningheart.com and learning about one’s heart health. 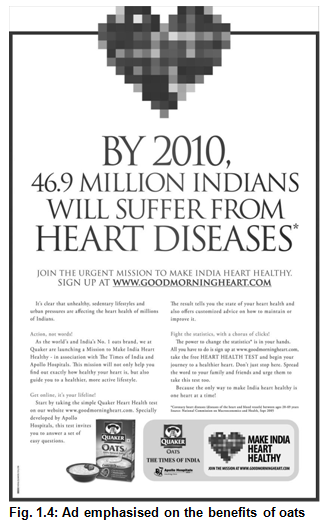 On the online platform, the Website goodmorningheart.com was a one-stop shop for everything pertaining to Quaker Oats and heart. The highlight of the Website was a smart heart challenge that prodded users to follow a Quaker-recommended healthy lifestyle and see a reduction in their cholesterol levels within 30 days. The Website also assessed risks associated with the heart and provided a range of solutions and information on how to stay heart healthy. It further listed several Indian recipes using Quaker Oats and gave diet and lifestyle tips. Banner advertising on portals such as Yahoo! and Google created an initial buzz and led users to the Quaker Website. Further, BBDO branded the month of October as “Oatober,” and various online and offline activities followed. The result was a 54 per cent increase in sales, while over 170,000 people signed up for the mission on the Website.

To give the campaign more credibility, scale and significance on a national level, Pepsico collaborated with Apollo Hospitals and the Times of India. A combined logo was unveiled in a print campaign in Times of India to kick-start the initiative. An interactive heart health test to answer the question “Is your heart older than you?” was developed in association with Apollo Hospitals for the Quaker Oats Website. As part of an outdoor event, Pepsico also partnered with the Chennai Marathon to get more visibility. Thus, through advertising and other tools of marketing communication, Pepsico has made an earnest effort to own and propagate the idea of “Heart Health through Quaker Oats.”

Visit its Website www.bbdoindia.in and find out if it is a full-service or a specialized agency.

Being the entrepreneur that he was, the owner decided to take Mr. Ram’s advice. He provided a small seed capital and with loads of encouragement asked Mr. Ram to set up shop.

Mr. Ram immediately went about putting his initial team together, took a small place on rent, and opened the doors of his agency. Thanks to the company’s own brand, he did not have to look for business initially. With his team and with the knowledge and experience he had of the industry, he went on to create some excellent advertising for the company’s brand.

Mr. Ram then decided that from being an agency located in one city, there was now an opportunity to branch off into other cities. He recognised that advertising being a people driven business, good people would bring good results. Accordingly he recruited a well-qualified and dynamic professional HR person from a well reputed management institute to help him in this task. Together they went about head hunting for the right talent and thanks to their infectious positive attitude and their big dream for the future were able to attract a fine bunch of professionals across various locations. These branch heads were encouraged to be entrepreneurs and were given adequate freedom to grow their businesses in their respective areas.

Mr. Ram provided the dream and the values under which the company would operate. Since he himself came from a modest middle class background, Mr. Ram brought in very Indian middle class values to the company. Values of hard work, striving for excellence, teamwork, right attitude that was not arrogant,integrity etc. bound the top management team into a powerful self-driven one, with Mr. Ram leading the charge from the front.

Thanks to the growth of business as a result of this effort, the company was able to invest in good infrastructure and good remuneration for the employees. As they say, success, begets success and the company grew from strength to strength. Being the visionary that he was Mr. Ram could anticipate the future and made bold investments in terms of setting up new divisions, that were well ahead of their times.

This provided the cutting edge for the agency, resulting in it becoming the third largest in the country in the short span of 10 years.

Thus, Mr. Ram was able to create an Indian agency which was well respected by the advertising Industry. In time he won several awards and was able to retire from the company with flying colours.

Kindly do any one of the given Project individually and submit the report to undersigned by email &/or hard copy by Monday, January 4, 2020.

Suppose say you have started a new retail store of branded Jeans and you wish to promote both in print media and web (online). Prepare a concise report on, usage of different IMC tools to promote branded Jeans. Mention the objectives you want to accomplish.

Find examples of a print ad and a television commercial for the same product. Do you see any difference in the message component or peripheral cues? Why or why not? Write a small report.

Find out two-three brands that have a poor advertising strategy giving reasons why the strategy can be considered weak. Write a report.

Write down 10-15 creative ideas for advertising your local grocery shop in a medium of your choice.Choose one as the big idea. Prepare a concise report.